The Queen of the Woods

It was a cold, sharp morning, and a tramp through the woods was prescribed after the previous day’s rain. Though tepid, the sun was eager, and the moisture conspired with the fallen leaves to produce a rich scent full of the promise of dormant life.

We were on the look-out again—this time in better conditions than The Foggy Day—and we hopefully surveyed the bare canopy above and the woodland floor below, the few fungi hinting at the occult life below the decaying leaves.

A little way into the woods and we stopped in our tracks as further down the avenue a dark form appeared, and stared and froze. We did the same. There was a long stand-off. This fallow deer was handsome and sweetly unaware of his appeal—all chocolate-brown and velvety-looking, even from a distance. He was soon joined by his companions, a handful of young, fit-looking bucks who sniffed at the ground and the air, and stopped stock-still and stared. And then another figure amongst the herd…this one a reluctant and striking beauty, as pale as the winter sun—shades of bone, ivory and vanilla layered upon one another to produce a dazzling white. She was less bold, advancing and retreating, unsure of herself, and half-hidden between the trees and the rest of the herd. 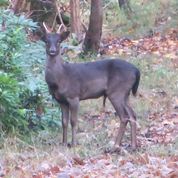 
The purity and beauty of these creatures is quite beguiling—it’s easy to see why white deer have enjoyed a mythical status in history, representing a whole spectrum of powerful and life-affirming notions—good fortune, protection, a disaster averted.
The Celts believed these ethereal animals to be messengers from The Otherworld, while the Native Americans believed, and still believe, that the appearance of white animals of any description represent prophecy. Both cultures saw them as harbingers of cataclysmic changes in the lives of those who spotted them…
In Arthurian legend white stags or harts were said to lead knights into battle and off on quests. One was said to have led King Arthur himself to a magic well, and another guided the knights Bors, Galahad and Percival to a forest chapel where it transformed into a vision of Christ. Indeed, they were believed to represent man’s eternal spiritual quest as they were perpetually pursued and never captured.
In Christianity the white stag came to symbolise Christ and His presence on Earth after the Roman soldier St Eustace converted to Christianity after encountering a white stag with a cross between its antlers.
Richard II was said to have adopted the white hart as his heraldic symbol after his huntsman was fatally wounded while defending him against such a creature in Windsor Forest. The king’s symbol was most famously depicted on the exterior side of The Wilton Diptych. (By a wonderful coincidence I have just discovered that the Diptych also portrayed Edmund, King and Martyr, subject of my last blog post!) The hart, wearing a crown and chain around his neck, sits in a grassy meadow strewn with rosemary believed to be in memory of Richard’s first wife, Anne of Bohemia. (Another delightful coincidence—see my recent blog post Pray, Love, Remember on symbols of remembrance, including rosemary!) Richard was also himself portrayed in the Diptych wearing a brooch with a white hart emblem. Association with Richard also explains the great number of pubs named “The White Hart”—in 1389 the king passed an act ordering inns to display a sign outside to identify themselves to the ale taster, and many adopted the white hart as their mark after Richard.
In literature, a white stag featured in C.S. Lewis’ The Lion, The Witch And The Wardrobe—described as both an ally of the White Witch and the creature who led the children out of Narnia, so adopting a dual role. And in Tolkein’s The Hobbit a white deer startles Bilbo and his dwarves in Mirkwood Forest, while in Harry Potter and the Deathly Hallows, just as in the legends of Arthur, a silver doe leads our hero to the Sword of Godric Gryffindor.
*
While the white deer may be the Queen of the Woods, she’s not the only supernatural creature dwelling there…she’s attended by blue pheasants, so I’m told, each as arresting and dazzling as a flock of peacocks. And the trees are full of little owls and tawny owls, a thousand pairs of eyes watching and waiting and taking note, miniature angels and scribes who will write down your thoughts and fears and deeds. 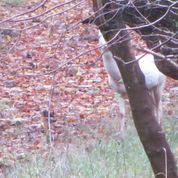 The reclusive "Queen of the Woods"

And was it coincidence, I wonder, that only hours after encountering the white doe I was rushed to hospital with a potentially life-threatening condition…but somehow luck was on my side, disaster was averted, my suffering minimal, perhaps due to the morphine and certainly due to the elusive but real feeling that some beautiful creature, pure in body and soul, was by my side protecting me? It’s fanciful, I know, but who’s to say that my dreams aren’t reality? After all, I featured in another patient’s drug-induced hallucinations and metamorphosed into a Russian Tsarina, not propped up in bed but seated on a golden throne…and I was as real to her as the tea lady, the doctors and the porters who trooped through our ward. And I fancy I had a pure-white familiar at my side—this beautiful white deer— a silver collar around her neck, resting her soft head on my arm every now and again to remind me she was there…
Heading homewards that day, the balls of mistletoe high in the almost-bare trees reminded us of the season and what it represents—the celebration of life old and new, of hope and redemption…how fitting, then, that the Queen of the Woods chose that day to appear to us and to follow me on my challenging journey of the subsequent hours and days, her beauty and gentle presence imprinted on my memory…

With thanks to Dom Kiddell for the inspiration and photography!
Posted by Emma Louise Oram at 00:31